We ate the whole menu... 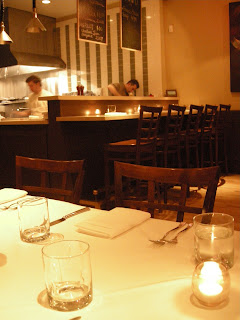 Julienne, in Santa Barbara, has been open since 2008. I have eaten there probably ten times and have watched them progress and really come into their own. They truly focus on and produce dishes with local ingredients. Many restaurants claim to do this, but Julienne actually does it.

Last night I dined there with friends to celebrate a birthday. All 6 of us chose the tasting menu accompanied by paired wines. Much to our surprise, we did not all get the same wines nor the same plates. In the end we had eaten every plate offered on the menu! I photographed my plates only otherwise it would have been the longest blog entry ever! I will mention the wine paired with the dish, however, I did not get the full names for most since there were so many bottles and dishes around.

To begin...fried cauliflower with white anchovies and a chipotle aoili. The cauliflower was very flavorful and the light batter and fresh oil did not mask the cauliflower taste. The aoili was fresh and subtle. Wine pairing - Gruner Veltliner 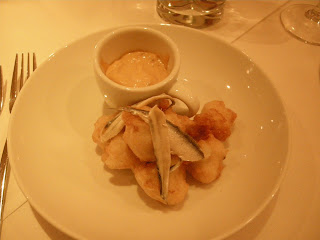 My second dish (my favorite) was a salad of butterleaf lettuce with pear slivers and smoked trout dressed in a light, vinagery vinaigrette. Yum. Wine pairing - Santa Barbara Winery Orange Muscat (a welcome surprise and actually quite a well balanced wine). 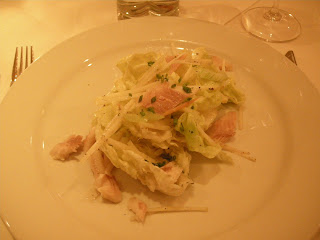 The salad was followed by Ricotta filled ravioli, crispy sweetbreads, Goleta Chanterelles, Spinach, Lemon Caper compound butter. The fun part about tastings is that you eat things you wouldn't necessarily order...like sweetbreads. I found this plate to be the most inspired and interesting. Justin (the chef) is a god at sauces and this one left us asking for bread to be able to mop up every last drop.
Wine pairing - 2008 Palmina Barbera 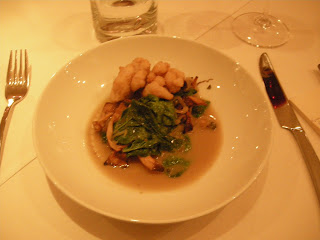 My second favorite dish was this one, of Rockfish with baby carrots, large black beans, pickled onions on top, and a sauce that once again left me mopping my plate! The Rockfish had so much flavor and was cooked to perfection - moist and seared. Wine pairing - Domaine de Tours, Chateauneuf-du-Pape. 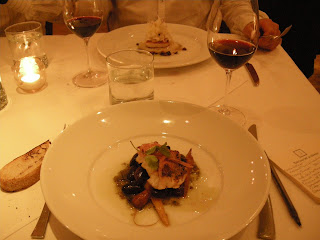 Next course, fried quail, mustard greens, bacon, cheese grits. The flavors were nice, however I felt that the quail got kind of lost between the fried flavor and the bacon flavor. I am also not a huge fan of grits/polenta/cornmeal, whatever you want to call it. And it was the third fried item I ate so I was kind of over the fried thing. I actually don't think much of anything should be fried in such a fine, high quality ingredient establishment as Julienne. But once again, the sauce = amazing. Wine pairing - Tour Bayard, Bordeaux. 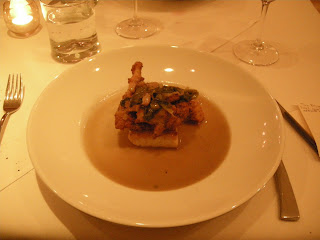 Cheese time! Hidden under that piece of ciabatta is a slice of Cashel Blue cheese from Ireland. Tastes similar to a mild Gorgonzola, but does have a flavor of its own...more grassy I would say. Wine pairing - Fortified Banyuls (similar to a port). 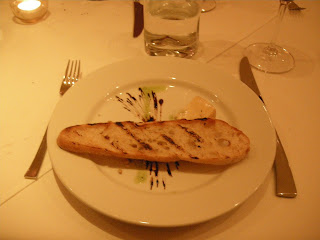 To finish off this feast, house-made Toffee pistachio vanilla ice cream. Super creamy and balanced. Wine pairing - Ojai Vineyard Ice Wine. One of my friends enjoyed a kiwi-lime sorbet that was out of this world. Extreme kiwi! 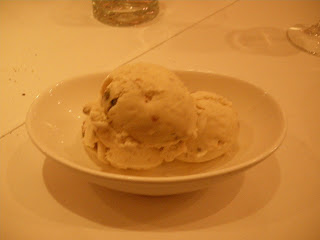 I am still not sure about everyone getting different dishes and wines. There is something about doing a tasting where it is fun to all be eating the same thing. I think it is overwhelming for the senses to have so many flavors flying around and one doesn't really get to disappear into the dish. I think they did it this way since they really do everything local and have limited supplies of certain ingredients.

Overall, bravo. Though prices are a bit steep in my opinion, the service is impeccable and their attention to detail and their warmth is appreciated and rare.
Posted by Eve at 10:34 AM No comments:

Santa Monica in a jiffy

There is always something nice about getting out of town and yesterday, Caroline and I got out of town. Caroline accompanied me to the French consulate where I picked up my new passport and ID card. This was the goal of the LA visit, but so as to make a day of it we decided to stay for lunch and a bit of window-shopping.
A friend recommended the restaurant Locanda del Lago located on the 3rd Street Promenade and Arizona Street. Much to our enjoyment we were seated at a table outside in full sunlight. As we soaked in the rays and vitamin D, we sipped our iced teas trying to decide what to order.
We both ordered the cabbage soup to begin with. It was smooth and very cabbagy! 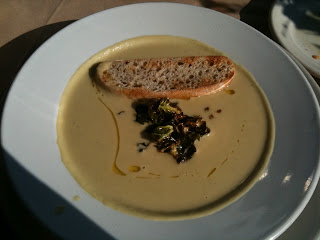 For the main course I enjoyed a dish of house made spinach tagliolini in a porcnini, cherry tomato white wine sauce with shrimp. Isn't the presentation beautiful! The dish was quite good, but became a little bland by the end of my plate. The fresh pasta had a lovely chewy consistency. 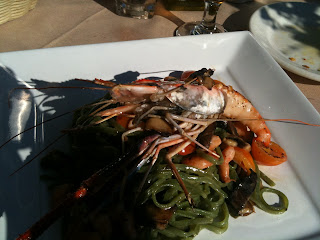 Of course a delicious espresso to finish off the meal and get a kick in the rear to walk along the promenade. Overall, Locanda del Lago is a quite enjoyable restaurant. Though I have to say that I think I prefer Trastevere just a block down on the promenade. The atmosphere is better and the menu is more interesting. But I certainly would not disregard this restaurant...it's in the Michelin guide afterall! 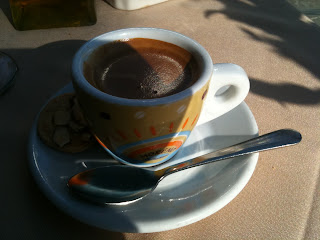