For Thanksgiving this year I headed up North to the Sacramento area. I was pleasantly surprised to find quite a food culture there. Here are some of my findings posted here, as well as in posts in the coming days...

After a lovely bike ride around Lake Natomas, we stopped in Folsom for lunch at a cute cafe called Karen's Bakery and Cafe (705 Gold Lake Drive). I couldn't decide what to order there as it all seemed quite enticing. I decided on the Ratatouille tart with poached egg on top. The crust was made of whole wheat and the ratatouille filling was delicious, especially with the runny yolk running all over it. My only complaint was that it was rather tiny and I was starving. Karen's has a lovely outdoor patio where you can see part of old town Folsom, which has become, I am told, much more Disneyland-esque than before... 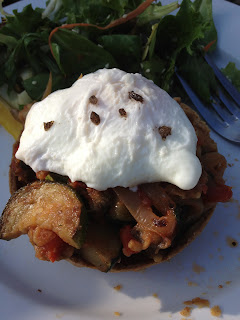 That night Jeff and I joined his parents at Paul Martin's American Bistro, located in Roseville near Sacramento. Located in a strip mall, I had my doubts, but the instant we walked in, those doubts disappeared. Paul Martin's has what I would call a luxury industrial look to it, with high ceilings with exposed pipes etc. and large open booths and a family style high top table for the Happy Hour crowds. The place was bustling. We sat at the bar where a most delightful, sincere staff of bartenders made us feel very welcome. I chose an Acme Pale Ale as my beverage and enjoyed it a lot. 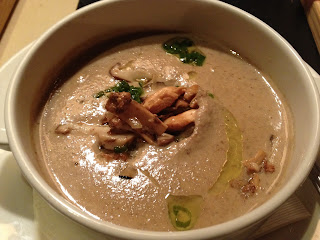 Seen above is a 3 mushroom, mushroom soup. YUM. It was so unbelievably mushroom-y. 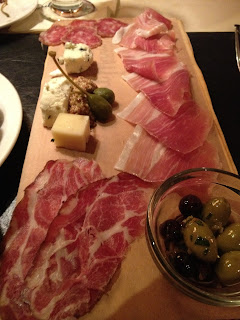 I followed the stellar mushroom soup with the Butcher's Block, as they called it - salumi and cheeses from Northern California accompanied by olives and a couple caper berries. Oh piggy goodness. Each meat melted in your mouth. The ultimate in indulgence, really. The cheese came from Point Reyes and there was one very goat-y goat cheese, one blue that tasted like a gorgonzola, and one hard cheese which tasted a lot like a Comte. Looking forward to eating there again...I was going to write-so as to explore the rest of the menu-, but really I might just order the same things again as they were so satisfying!! Turns out there is also a location in El Segundo as well as in Irvine...Roseville being the original location...(1455 Eureka Road) 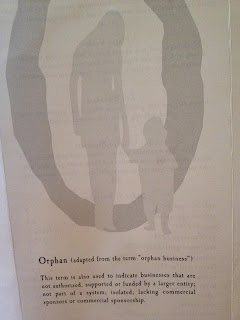 In East Sacramento there is a little breakfast place called Orphan. (Orphan is an orphan business which is a small operating business unit, which does not integrate into a larger business sector.) And let me tell ya. It is amazing. What you see below is the Platas Verdes. That green goodness you see there is their homemade tomatillo sauce. It was so amazing that I am drooling on my keyboard right now just thinking about it. Under the green are two poached eggs over two super fresh flour tortillas with black beans and jack cheese between them. That tomatillo sauce made the dish. On top of it, this only cost $8.50!?!? Amazing. If you want coffee, they only serve drip coffee and offer up some super delicious ones at that. They even roast their own beans. The servers and staff are super genuine and kind. No fake smiles here. Get over there and eat this...or anything on the menu, really. Yum. 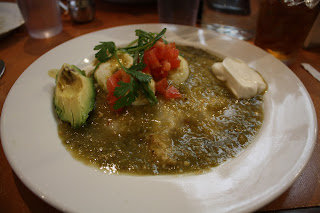