It would be impossible for me to write everything that my friend Caroline and I did while in Costa Rica, so here is one journal entry from  Nosara, to give you an idea of the adventures and sights we experienced:

The Harmony Hotel is a beautiful place. The calm atmosphere, warm people, organic food, and natural ambiance creates a mini oasis. Steps from Playa Guiones one is in the water within 5 minutes and a guard watched your things so you can swim carefree. After a most delicious breakfast of fresh fruit and homemade croissant, we headed to said beach. Along the crashing waves we walked to the left till the water was coming up to high for us to cross. Waves crashed and rolled in a white froth to the dark brown and black sand all along the coast. We played in these waves for a bit and moved on to "our beach" (Playa Pelada) where waves are smaller. It was awesome. We played int eh waves there for quite a while. The water was so clear yet a deep azure at the same time. Unable to resist, we sat on the sand where the waves washed up on us and we covered ourselves in sand. The coast in this area has rocks jutting out, dark masses on the blue backdrop. 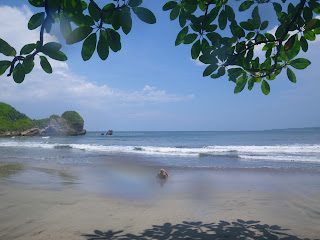 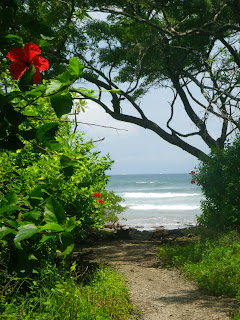 Back by the pool I enjoyed a Mahi Pita full of fresh veggies. There's a surprising little amount of people here making this place so peaceful. Rainy season rocks!
In the village we explored the Tica Massage place (which I do not recommend as it hasn't a good vibe) and enjoyed cups of coffee at Robin's alongside a blue bird with a funny feather on its head.
I attempted to do some watercolor painting in the afternoon while Caroline wrote in her journal. Caroline thinks it turned out pretty good. At 5pm our transport picked us up and took us to Playa Garza. Carlos, who drove, was born there and also owned the general store and a 26' boat for fishing. Lovely guy.

Pacifico Azul was out destination - a fresh, local seafood joint recommended to us by our friends back at the hotel. THe place was wide open with chairs and tables placed at random out on the sand. The water was just right there framed by palm trees. Greeted by a couple dogs we purchased dos Imperials and asked if they minded us to walk on the beach with them and the host man smiled in the Costa Rican casual way and encouraged us to go on with out flow and that he trusted us, as we had not paid yet. We saw 2 horses walking on the beach alone and could not resist going up to them. Our plan was spoiled when our "posse" (as they were later named) barked their way over to the horses and chased them away. Once again, it is just us on the beach with our posse of all female dogs. Totally insane! We sat at our table by the sea for a few hours drinking Imperial (better than Pilsen we decided) and easting delicious ceviche and watching the sunset, toes int he sand the posse around us. Note: wear bug spray - fleas and mosquitoes abound. Pacifico Azul is amazing and on Playa Garza which qualifies as one of the most beautiful beaches I have been too, and it was even an overcast evening! 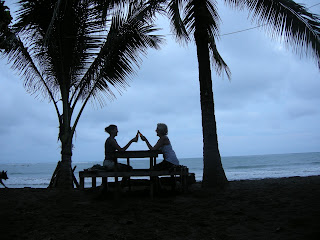 Earlier in the day we had encountered the woman at the health center and mentioned that we missed doing yoga that morning, but she told us that it had been cancelled because of no teacher around. She said that we must be "in the flow" meaning that by doing as we feel in the moment, we are doing what is working and most efficient and fulfilling.

This is what everyday has felt like so far - in the flow, in the moment. We do lots in the mornings, have calm lunches, and leisurely afternoons as it usually rains then. It rains the most in the middle of the night, clinking on our bungalow's tin roof.

We created a drink of cacique and their passion fruit min juice drink which we enjoyed with the flour-less chocolate cake. We attempted to play ping pong but could not see the ball all that well in the dark so opted to take a dip in the pool. So peaceful in the dark of the night.

I keep saying ridiculous because everything is so ridiculously wonderful. We are appreciating every moment and that Time moves extra slow around here...
Pura Vida! 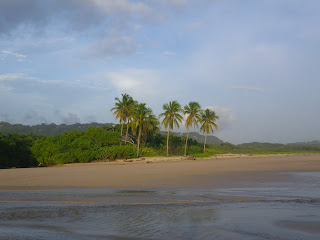